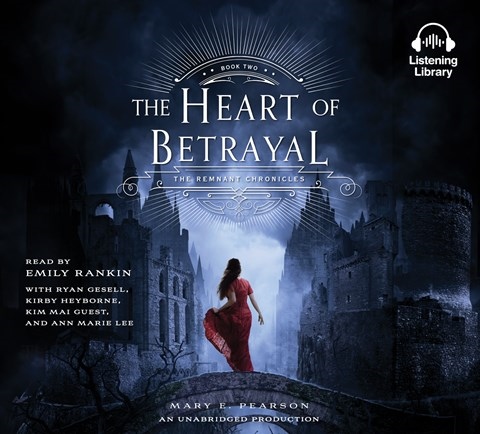 THE HEART OF BETRAYAL

The second book in the Remnant Chronicles is told from multiple points of view, though most of the story is told through the eyes of Princess Lia, narrated by Emily Rankin. Rankin is faced with the task of portraying the princess as young and sometimes naïve yet strong and continuously developing as a character, which she does well. Alternating sections are also told through the voices of Rafe, the prince of Dalbreck, narrated by Ryan Gesell; Kaden, the Vendan assassin, narrated by Kirby Heyborne; and Pauline, Lia's friend who is desperately trying to rescue her from her imprisonment in Venda, narrated by Kim Mai Guest. Additional narrative between chapters is read by Ann Marie Lee. While the various narrators help the listener differentiate between the characters, the variety also creates some inconsistencies in the voicing of dialogue, with each narrator reading characters slightly differently. The cliff-hanger ending will leave listeners eagerly awaiting the next installment. E.N. © AudioFile 2015, Portland, Maine [Published: SEPTEMBER 2015]