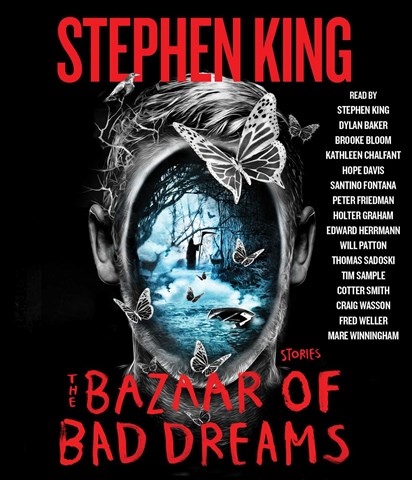 THE BAZAAR OF BAD DREAMS Stories

King returns with another fantastically dark collection of mostly new short stories--delivered by an all-star group of narrators. The group includes some reprints (such as "Ur") but mostly new stories, and even two poems. Each narrator is a perfect fit for the stories he or she reads--it's rare to find such a collection with no misses, but it's not unusual for King. Narrating the stories' introductions himself, King makes the listener feel like his confidant every time. Cotter Smith steals the show, masterfully performing several pieces, including the poem "The Bone Church," the best performance of the collection. Smith's craggy, emphatic projection and morose pauses capture the essence of the poem and tingle the spine. L.E. © AudioFile 2015, Portland, Maine [Published: NOVEMBER 2015]