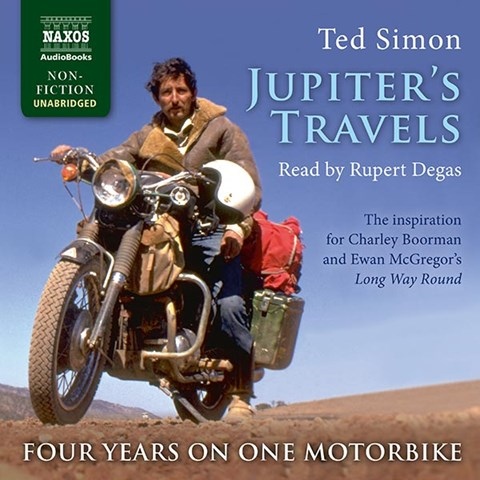 In 1973, Ted Simon embarked upon an epic journey that would take him 64,000 miles around the world on a Triumph Tiger motorcycle. Four years later, he would return to London a changed man with many a colorful tale, recounted here. Simon himself provides the introduction for his epic motorcycle journey, and hearing his voice sets a good tone for the rest of the audiobook; in fact, he quips, "Rupert Degas sounds much more like me than I do." Narrator Rupert Degas then takes over for the remainder, with delightful results. His British-accented diction is clear, and his speech follows natural patterns, appropriate for a memoir. Degas's accents for the various people Simon encounters add an extra dimension to the work, creating a vivid listening experience. S.E.G. Winner of AudioFIle Earphones Award © AudioFile 2015, Portland, Maine [Published: DECEMBER 2015]