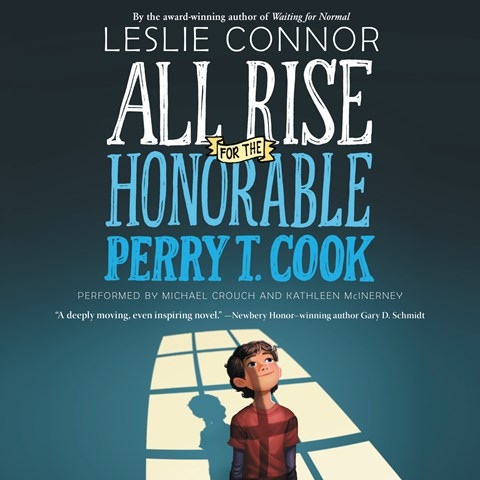 ALL RISE FOR THE HONORABLE PERRY T. COOK

Michael Crouch's voice suggests the unspoiled innocence of 11-year-old Perry, who has been raised in a coed correctional facility where his mother is incarcerated. Perry's enthusiasm for small pleasures expresses an appreciation born of his sheltered background. Crouch voices Perry's simple thoughts and comments, which reveal the rich perspective and wisdom he has derived from his nurturing mother and the male inmates who have raised him. The irony is painful when a district attorney decides to rescue Perry from his prison home. Crouch clearly conveys the D.A.'s ruthlessness. Kathleen McInerney, Perry's loving mother, burns with fury for the man and the legalities that separate her from her son. She fiercely hides the past as Perry determines to discover the truth. This poignant story inspires questions about truth, justice, family, and home. S.W. Winner of AudioFile Earphones Award © AudioFile 2016, Portland, Maine [Published: MARCH 2016]