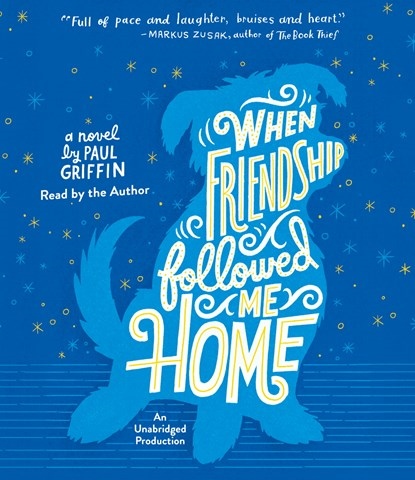 WHEN FRIENDSHIP FOLLOWED ME HOME

As the author of this book, Paul Griffin knows his characters inside and out. His narration sparkles with all the nuances that his intimate knowledge brings. The plot involves a foster home, a stray dog, the death of an adoptive parent, and other significant events. As the preteens in the story, Griffin delivers all the snarkiness of 12-year-olds. As hero Ben Coffin, Griffin conveys private moments of optimism and despair and captures spot-on conversations between Ben and his friend, Chuckie. Portraying adults, Griffin imparts the warmth and care in some and communicates the discomfort of those who don’t have an affinity for kids. As Mrs. Lorenz, in particular, Griffin illuminates the gentle sarcasm and wisdom of a woman who sees the boy within Ben and decides to bring him into her family. A.R. Winner of AudioFile Earphones Award © AudioFile 2016, Portland, Maine [Published: JUNE 2016]