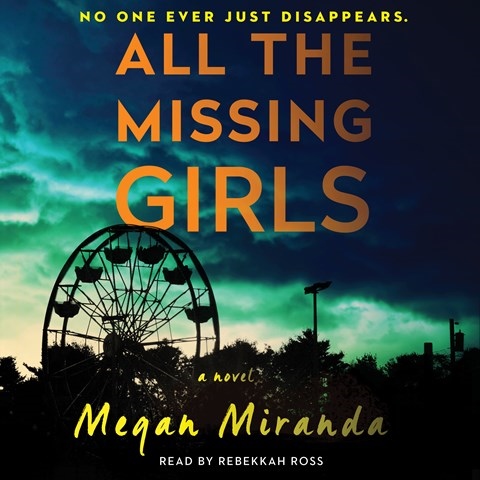 ALL THE MISSING GIRLS

Rebekkah Ross uses a coolly detached voice to narrate this spellbinding mystery. The story is told backwards, starting on the fifteenth day after the disappearance of Annaleise, neighbor of Nic and girlfriend of Tyler. Ten years earlier Nic's friend, Corinne, also went missing from Cooley Ridge. At that time, Nic and Tyler, among others, were the focus of the unsolved investigation. Ross rhythmically builds and dissipates the story’s tension and excels with descriptive details and subtle character differentiation. Her pace is unrelentingly steady yet captures the many changes in the various flawed characters. As the layers of this atmospheric mystery are peeled back, Ross subsumes herself into the story and engages listeners in discovering the truth of what happened. S.C.A. Winner of AudioFile Earphones Award © AudioFile 2016, Portland, Maine [Published: AUGUST 2016]