Home»Reviews»TELL THE TRUTH & SHAME THE DEVIL 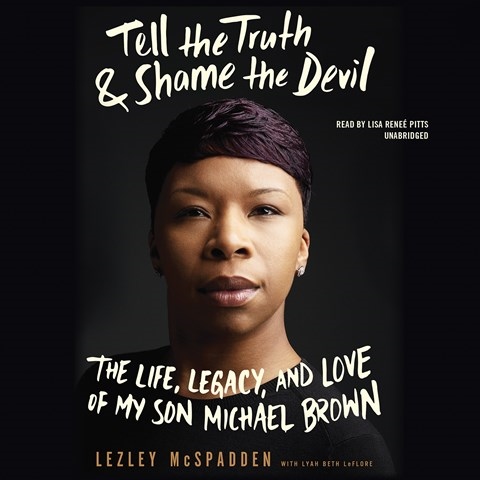 TELL THE TRUTH & SHAME THE DEVIL The Life, Legacy, and Love of My Son Michael Brown

This production robs one’s breath while bestowing enlightenment. Michael Brown was the teenager who was shot by police in Ferguson, Missouri, during the summer of 2015. This memoir is by Brown’s mother. Narrator Lisa Renee Pitts delivers a performance so believable and emotionally authentic that it reaches inside listeners and shakes their very souls. From the quiver in her voice, indicating a desperate attempt to hold back tears, to the genuine laughter erupting out of a heart overflowing with joy, Pitts forces listeners to experience the life-altering emotions of her subject. Lezley McSpadden lived every mother's worst nightmare under the microscope of society's scrutiny and criticism. Pitts's narration reminds listeners that she's a human being who overcame myriad obstacles in raising a black son only to have him ripped away far too early. This narration epitomizes the power of audiobooks. J.F. Winner of AudioFile Earphones Award © AudioFile 2016, Portland, Maine [Published: NOVEMBER 2016]