Home»Reviews»THE FIFTY-YEAR MISSION: THE NEXT 25 YEARS 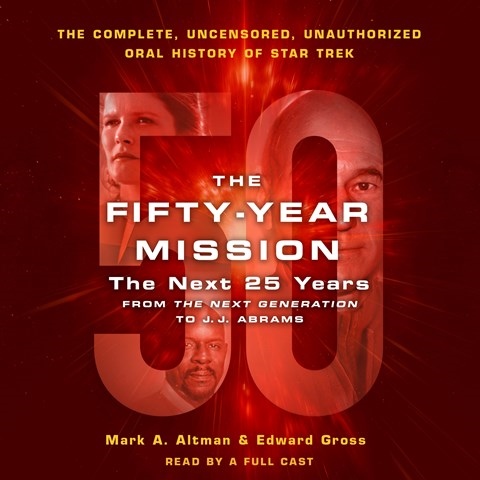 THE FIFTY-YEAR MISSION: THE NEXT 25 YEARS From The Next Generation to J. J. Abrams: The Complete, Uncensored, and Unauthorized Oral History of Star Trek

Did you know that Jonathan Frakes (Commander William Riker on "Star Trek: The Next Generation") really could play the trombone or that network executives worried that Jolene Blalock's (the Vulcan T'Pol on "Star Trek: Enterprise") ears were too pointy? These and hundreds of other factoids are sprinkled throughout this entertaining and exhaustive oral history of the second golden era of the Star Trek franchise, which runs from 1987 to the present. More than a dozen voice talents admirably read the hundreds of quotes and opinions from scores of "Star Trek" cast, crew, and insiders, with an emphasis on the writers and producers. But when one hears the names of such living luminaries as Patrick Stewart and Kate Mulgrew, it's a shame not to hear their iconic voices reading their own words. Still, this is an absolute must for the serious fan. B.P. © AudioFile 2016, Portland, Maine [Published: DECEMBER 2016]