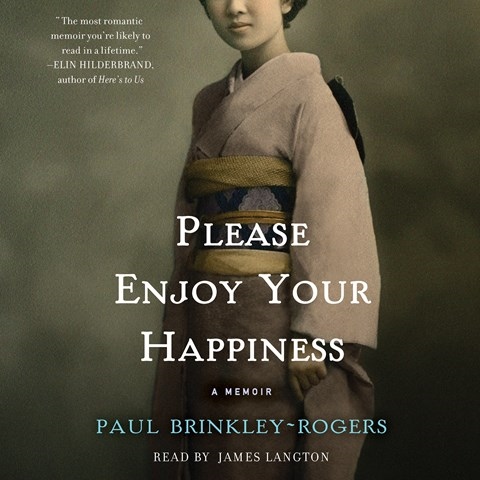 PLEASE ENJOY YOUR HAPPINESS A Memoir

In the words of the American lyricist Alan Jay Lerner, "There's always one you can't forget." Narrator James Langton bears listeners on the waves of memory with a lightness in his polished British voice that belies the sadness of a love affair never meant to last. Brinkley-Rogers recalls his profound relationship with an older woman named Yukiko while stationed in Japan in 1959 at the age of 19. Langton gives Yukiko a lilting, sweet voice with the subtly clipped tones of someone whose first language is not English. Even the raw parts of the story are told with an earnestness that speaks to the goodness of the world, and the listener can't help but fall into the tale. This is a work that is profoundly human and lovingly rendered. E.E. Winner of AudioFile Earphones Award Â© AudioFile 2017, Portland, Maine [Published: APRIL 2017]