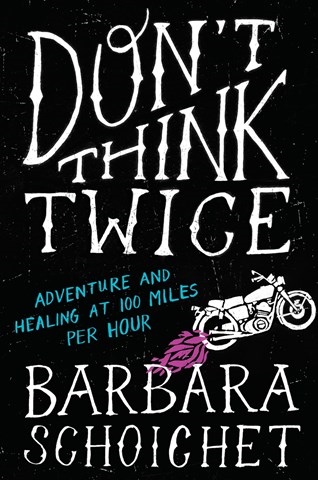 DON'T THINK TWICE Adventure and Healing at 100 Miles Per Hour

Fifty-year-old Barbara Schoichet shares her exuberant but sometimes painful coming-of-age journey. After she loses, in short succession, her mother, girlfriend, and job, she decides to follow her dream to ride a Harley-Davidson across the country. Schoichet vividly describes riding school and her no-nonsense instructor. Listeners then join her on the colorful ride from New York to L.A. The most memorable details include descriptions of the challenging weather, bad food, crummy motels, and people she meets--lovely, scary, and in-between--such as the two guys named Dave who sell her the cycle, a spot-on psychic, and an old Native American woman who gives her a significant totem. Well-rendered memories sometimes intrude on the adventure but are often soothing, giving listeners insight and, most importantly, closure for Schoichet, who emerges a stronger and healthier woman. S.G.B. © AudioFile 2016, Portland, Maine [Published: DECEMBER 2016]