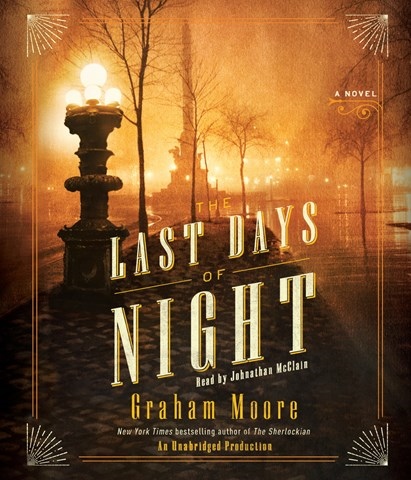 THE LAST DAYS OF NIGHT

Who would have thought that the race to produce a workable light bulb could serve as the basis of a gripping historical novel? The story of the late-nineteenth-century battle between Thomas Edison and George Westinghouse, as narrated by Johnathan McClain, is the best kind of can't-turn-it-off listen. Coils, wires, direct and alternating current, and the strange inventor Nikola Tesla are the stuff of marvelous intrigue as Westinghouse's lawyer, Paul Cravath, battles Edison's threats. McClain, whose Cravath has an enthusiastic mid-American persona, creates equally imaginative vocal portraits of Edison, Westinghouse, and Tesla, and believably colors several different women. Nicely marrying his pace and tone to each scene, and offering an easy narrative voice, McClain creates a superb audio experience. A.C.S. Winner of AudioFile Earphones Award © AudioFile 2016, Portland, Maine [Published: NOVEMBER 2016]