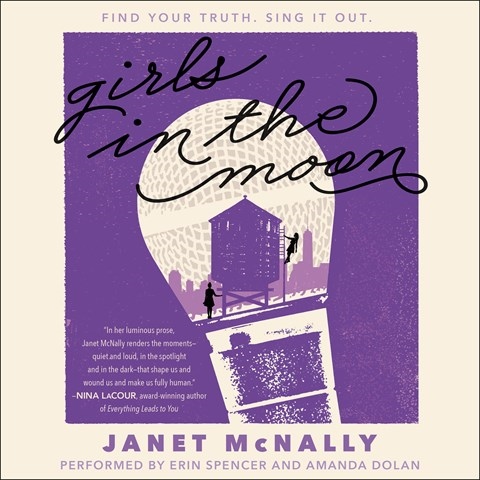 GIRLS IN THE MOON

Narrators Amanda Dolan and Erin Spencer complement each other perfectly in this coming-of-age novel. The story is told from the alternating points of view of ex-rock goddess Meg Farris and her sweet 16-year-old daughter, Phoebe. As Phoebe visits her older sister in New York in search of her famous family's untold history, Meg remembers her transition from a carefree badass to a protective new mother dealing with the pressures of fame. Like actual family members, the two narrators sound similar but not identical. Spencer's air of wonder as daughter Phoebe contrasts with Dolan's portrayal of Meg, who is jaded but softened by motherly love. Older sister Luna sounds like the creative soul she is; her languid speech at times spikes with unbridled passion. The dual narration further brightens a descriptive story. A.L.C. © AudioFile 2017, Portland, Maine [Published: JANUARY 2017]