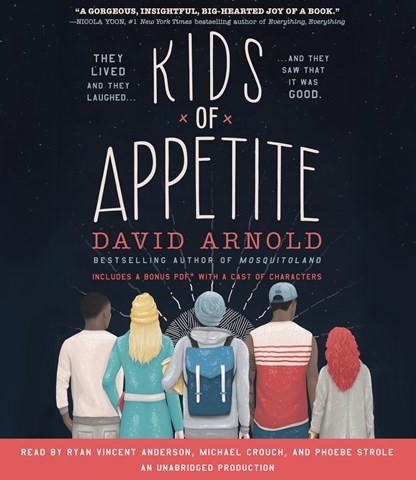 Narrator Michael Crouch’s portrayal shows the many facets of 16-year-old Vic’s sorrow. Vic’s father’s death and his mother’s new relationship leave him feeling alone in coping with his Moebius syndrome, which paralyzes his face. Miserable Vic runs away with his father’s urn and meets Mad and three other homeless kids who are cared for by Baz, a kindly young Congolese woman. Phoebe Strole captures Mad’s strident tones and, gradually, the hidden vulnerability she bears from an abusive home. As Mad’s harshness turns to warmth, Vic’s hope of love is realized. Interspersed in their alternating chapters are Ryan Vincent Anderson’s accented comments as Baz. Anderson’s deep, sonorous voice reflects Baz’s experiences and contrasts with the youthful timbres of Vic and Mad. S.W. © AudioFile 2016, Portland, Maine [Published: NOVEMBER 2016]