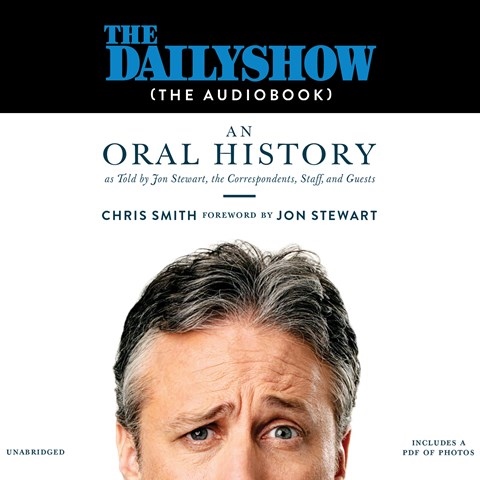 THE DAILY SHOW (THE AUDIOBOOK): AN ORAL HISTORY as Told by Jon Stewart, the Correspondents, Staff and Guests

On January 11, 1999, comedian Jon Stewart took over the helm of Comedy Central's "Daily Show." For the next 16 years, the team proceeded to mix news, satire, and pop culture into a unique blend of award-winning, groundbreaking entertainment. This in-depth oral history, read by a bevy of topflight audiobook narrators, takes the listener behind the scenes to hear from the writers, producers, and comics who brought the show to life. Reenactments of some of the best-known bits are included. Although the comments and opinions of such recognizable talents as Jon Stewart, Stephen Colbert, and Samantha Bee are prominent throughout, it seems like a missed opportunity that their iconic voices were not included in this production. Still, this is a must-listen for the true fan. B.P. © AudioFile 2017, Portland, Maine [Published: FEBRUARY 2017]