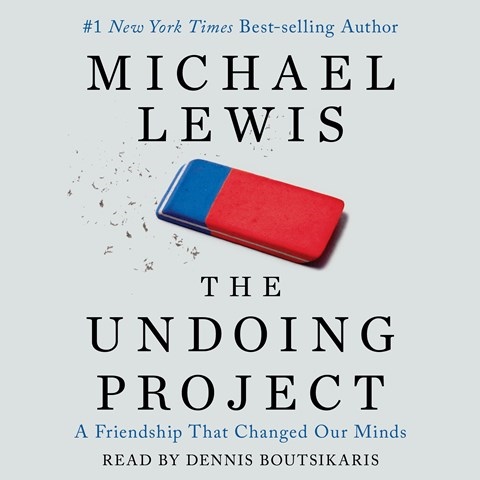 THE UNDOING PROJECT A Friendship That Changed Our Minds

Most decisions we make are based, in some part, on irrationality-- sometimes referred to as a gut feeling or intuition. Author Michael Lewis simplifies the brain-boggling lifework of Amos Tversky and Danny Kahneman, who developed the new discipline of behavioral economics to explain the seeming irrationality of financial decision making. Narrator Dennis Boutsikaris's faultless and cogent reading keeps the project moving, but, even so, listeners may need to occasionally hit the rewind button to appreciate the science as the author recounts how the Israeli duo combined cognitive psychology and mathematics to analyze decisions revolving around money. In the process they identified phenomena with exotic titles such as loss aversion, framing, overconfidence bias, and more. For a work about economics, this is a surprisingly emotional story of how two selfless collaborators were eventually undone by their own success. R.W.S. Winner of AudioFile Earphones Award © AudioFile 2017, Portland, Maine [Published: JANUARY 2017]