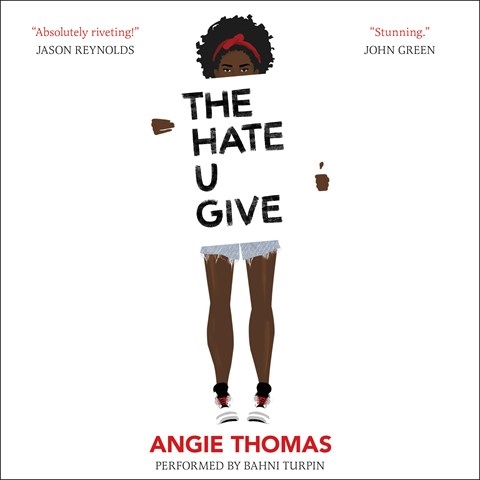 THE HATE U GIVE

Starr is from a gang-ridden neighborhood but attends a private, mostly white, school. Differences between these worlds widen when Starr is the sole witness of the murder of her childhood friend by a white policeman. Bahni Turpin’s narration of this scene is poignant and horrific as unarmed Kahlil questions the officer’s stopping him and the officer becomes aggressive and shoots him three times in rapid succession. Starr is haunted by the event. Her fear and anger illuminate culture clashes and disparities, injustice and racism. This gripping story is not just issues oriented. Turpin’s portrayals of all the characters are rich and deep, environments are evocatively described, and Starr’s fraught struggles to understand life’s complexities are believable. Many intense, difficult moments are relieved by the humor and the warmth of Starr’s unique family. S.W. Winner of AudioFile Earphones Award © AudioFile 2017, Portland, Maine [Published: MARCH 2017]