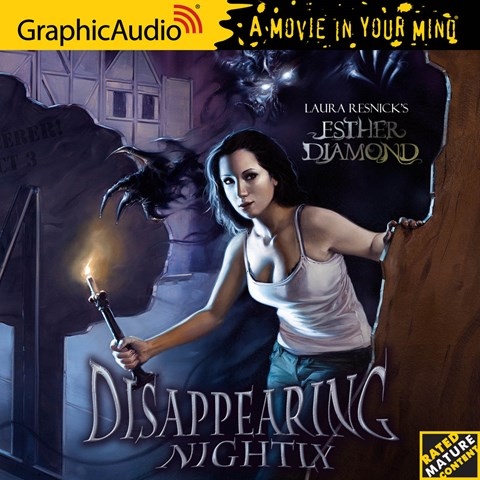 by Laura Resnick | Read by Colleen Delany and a Full Cast

Colleen Delany and a full cast tell the story of Esther Diamond's dream to be taken seriously as an actress in New York City. Currently an understudy for the insufferable diva Golly Gee in an off-Broadway fantasy production, Esther would love nothing more than for the leading lady to disappear--that is, until she actually does. As the mystery unfolds, the listener follows Esther into a realm of cowboy conjurers, drag queens, and a 350-year-old magician. While Delany's straightforward delivery is well articulated, she often has to fight for the spotlight as sound effects and ill-timed musical interludes ham it up in the background. Nonetheless, the cast's eclectic array of character inflections--which run the gamut from Kentucky drawls to Brooklyn accents--is great fun. The result is satisfying tongue-in-cheek escapism. E.E. © AudioFile 2017, Portland, Maine [Published: SEPTEMBER 2017]