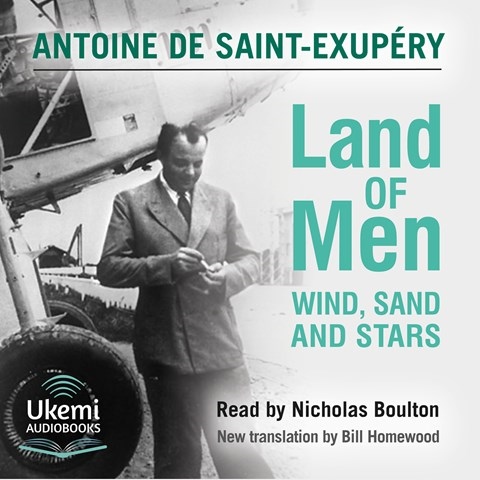 The warm romance of Nicholas Boulton's baritone heightens the lyricism of this classic memoir about airplane flight by Antoine de Saint-Exupéry, author of THE LITTLE PRINCE. LAND OF MEN is the original title translated from French (TERRE DES HOMMES); the more familiar WIND, SAND AND STARS is the English title. Before he disappeared while flying a reconnaissance mission over the Mediterranean in 1944, Saint-Exupéry wrote some of the literary world's most famously poetic descriptions of the physical and metaphysical wonders of flying. This audiobook remembers the time he spent on the mail run over the Sahara, often flying at night with few landmarks but the stars. It's a paean to adventure, technology, and the natural world, which Boulton reads with clarity and passion. His realistic French accent and skill with characterization enliven the conversational sections, and his engaged pacing beautifully intensifies the book's soaring narrative. A.C.S. © AudioFile 2017, Portland, Maine [Published: APRIL 2017]