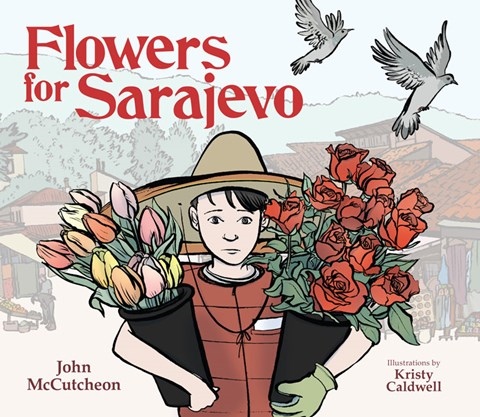 Following a 1992 mortar attack that killed 22 civilians in a Sarajevo market square, cellist Vedran Smailovic performed in the ruins. John McCutcheon is both author and narrator of this picture book based on that event and told in the voice of Drasko, a young boy who sells flowers in the square. McCutcheon's rich baritone voice suits the gravity of the story yet conveys the quick speech and impatience of a boy who is questioning his father while trying to make sense of a world suddenly plagued by war and uncertainty. McCutcheon also imbues Drasko with a sense of optimism as he strives to make Sarajevo beautiful with his flowers. Additional tracks include the story, notes, a page-turn version, the Smailovic cello elegy, an original song, and a conversation with the author. L.T. © AudioFile 2017, Portland, Maine [Published: MARCH 2017]