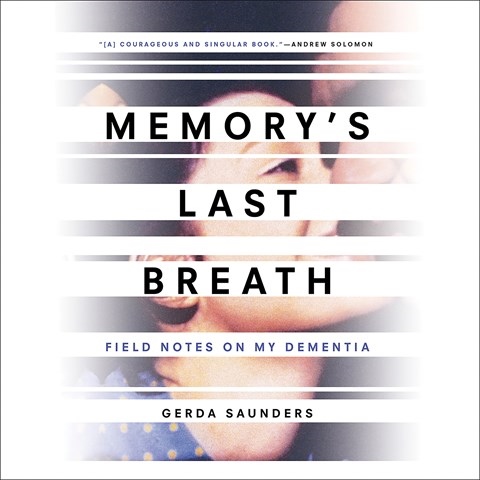 Narrator Edita Brychta sounds exactly like a South African who has lived in the U.S. for decades and had the edges knocked off her accent. Her delivery fits author Gerda Saunders perfectly. Saunders's memoir is both tragic and courageous as she outlines her experience of early-onset dementia, along with other major stages of her life including growing up in apartheid South Africa, meeting her husband at university, and working as a gender studies professor in Utah. Scattered throughout are her "field notes"--memory lapses documented in a notebook she received as a retirement gift (a retirement prompted by dementia). Brychta adeptly expresses Saunders's honesty and no-nonsense attitude as well as her gratitude and romantic love for her husband. It is wonderful to hear Saunders herself read the acknowledgments and the lengthy author's note discussing the origins and difficulties of writing the book. A.B. © AudioFile 2017, Portland, Maine [Published: AUGUST 2017]