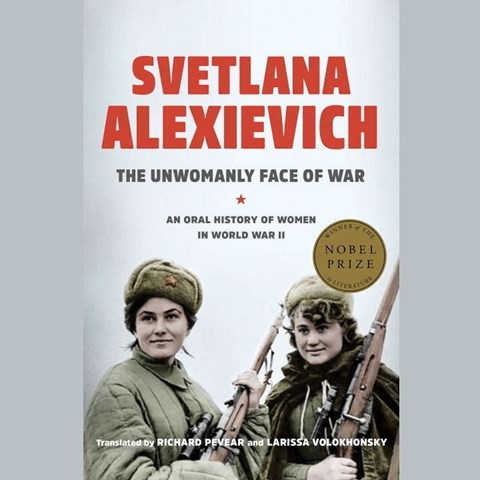 THE UNWOMANLY FACE OF WAR

Julia Emelin and Yelena Shmulenson both give sublime performances of this exceptional work by Nobel laureate Alexievich. This compilation of WWII reminiscences by female veterans of the Red Army was first published nearly 35 years ago and was controversial for its unvarnished view of the war, with the author even being sued for slander a number of years later. These women veterans recall how brutal and horrible their service was. Alexievich's work is a feminine view of the war--many of the woman longed for the feminine aspects of life when they found themselves in such a brutal and overwhelmingly male world. Emelin's and Shmulenson's Slavic accents make it seem as though one is hearing each veteran speak herself. Their expression and inflection are perfect. Some male accounts are performed by two additional performers. After beginning this work, it's next to impossible to stop listening. M.T.F. © AudioFile 2017, Portland, Maine [Published: SEPTEMBER 2017]