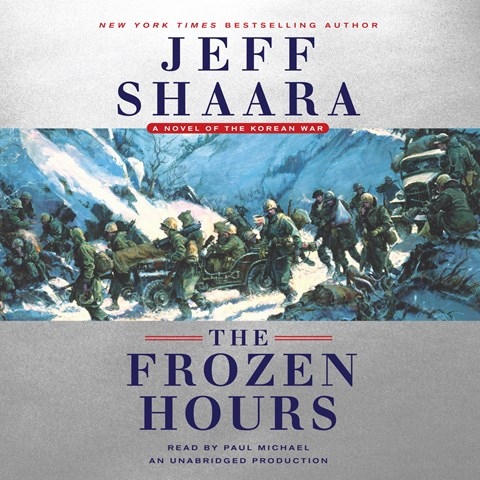 THE FROZEN HOURS A Novel of the Korean War

Jeff Shaara's writing about the icy Korean War battle at Chosin and its steep toll is reflective, getting into the thoughts of the people who fight on both sides. Narrator Paul Michael's voice takes on a tough quality for the Americans' actions and emotions. Michael becomes more subdued, with a whisper of China's moral certainty, as he shifts to the camp of North Korea's Chinese allies. The horrors of war, including men killed by bayonets as they sleep, are juxtaposed with everyday emotions such as the joys of Tootsie Rolls and the misery of sweating feet in cold weather. Listening is like eavesdropping on the combatants. Shaara shows the brutality of a war that has effects reaching into the present day. J.A.S. © AudioFile 2017, Portland, Maine [Published: JUNE 2017]