HomeÂ»ReviewsÂ»ONE OF US IS LYING 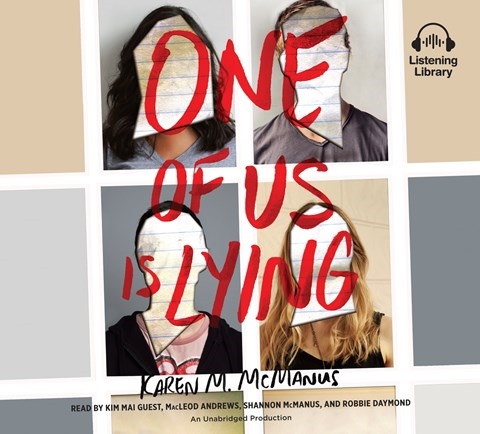 ONE OF US IS LYING

Four actors deliver the alternating narratives of four high school students who are accused of murder. Narrator Kim Mai Guest reflects Bronwyn's wit as well as her humiliation when she's caught cheating. Robbie Daymond affects the outwardly careless attitude of Nate, a drug dealer, along with his hidden tenderness. Shannon McManus depicts timid Addy, who at first is cowed by a dominating boyfriend but who later reveals her true courage. With a Southern accent, MacLeod Andrews portrays Cooper, who affects nonchalance in the face of his bullying father before revealing what he's really afraid of--his own sexuality and his father's homophobia. The unity of the four narrators captures the devastation of shame and the power of overcoming wrongs. S.W. © AudioFile 2017, Portland, Maine [Published: SEPTEMBER 2017]