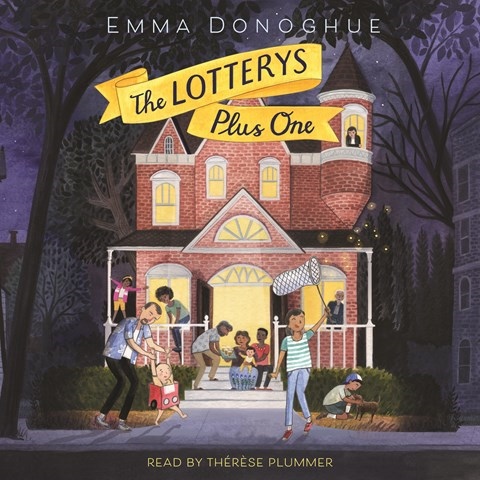 THE LOTTERYS PLUS ONE

Thérèse Plummer energetically introduces this large multicultural, diverse family: two gay dads, two lesbian moms, and seven biological and adopted kids, each named after a tree. After winning Toronto's lottery, they change their last names to Lottery, buy a massive house, and decide to live a home-schooled, off-the-grid lifestyle, engagingly described by Plummer. She deftly creates varied personalities and accents--for example, MaxiMum's lilting Jamaican accent, PapaDum's Indian accent, and adorable kid and teen voices. Listeners will immediately hear their lives change again when PopCorn's father--called Grumps by the kids--comes to live with them. Plummer's standout creations are Grumps, with his wit and Scottish brogue, and 9-year-old Sumac, who tells this story and is at once charming and cunning. Audio is the perfect vehicle to capture this bevy of delightful characters. S.G.B. © AudioFile 2017, Portland, Maine [Published: JUNE 2017]