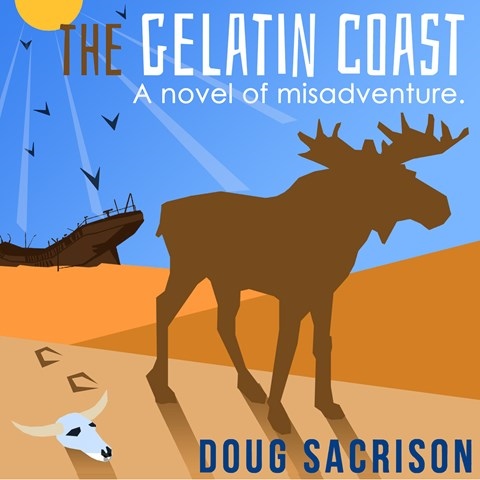 THE GELATIN COAST A Novel of Misadventure

There's not an accent or personality that narrator Joel Froomkin doesn't deliver with zest in this hilarious romp. Through a series of calamities, Jamie Brewster finds himself on Africa's Gelatin Coast (where ships go to die). There he befriends Ernest, an African child, and a Canadian moose named Mickey. When a billionaire wants to kidnap Mickey Moose, Brewster energetically responds. He meets an eccentric Swiss pirate, a runaway baseball player, and many more, each dynamically presented, along with laughable one-liners, by Froomkin. His clear descriptions help listeners imagine each situation, no matter how implausible. His most memorable characters are endearing Ernest and Brewster's mother, whose pride in her son and her need to discipline him make her sound like everyone's mom. Audio enhances this delicious, quirky story and adds to the fun. S.G.B. Winner of AudioFile Earphones Award © AudioFile 2017, Portland, Maine [Published: JULY 2017]