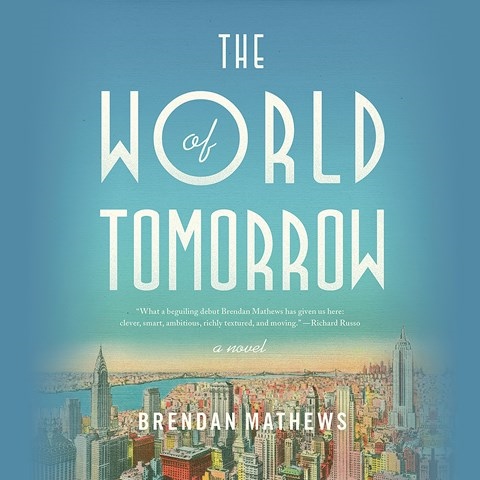 THE WORLD OF TOMORROW

This cheerfully overstuffed audiobook is a lot of fun if you don't expect it to do anything it's not trying to do. The plot is in the style of a Depression-era comic strip or penny dreadful, never convincing but often entertaining (though a good editor wouldn't have hurt.) The setting is the New York of the 1939 World's Fair, and the cast of characters include jazz musicians, IRA terrorists, millionaire arrivistes and imposters, a medium, and a young priest whom an explosion has rendered deaf and mute who is accompanied everywhere by the ghost of poet W.B. Yeats. Graham Halstead's enthusiastic performance is great with, say, the shifting accents of the Irish ex-con pretending to be a Scottish lord, and is game and lively throughout. B.G. © AudioFile 2017, Portland, Maine [Published: SEPTEMBER 2017]