Home»Reviews»HOW TO LOSE A MARATHON 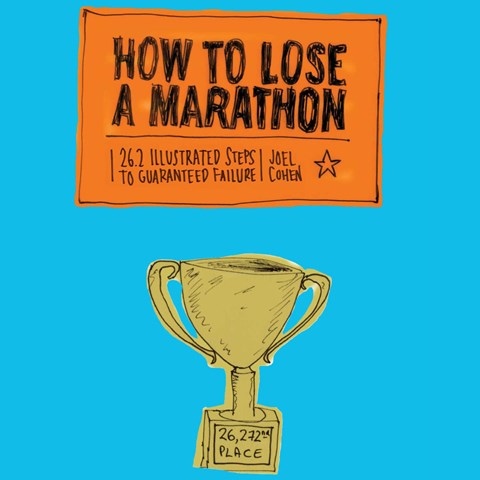 HOW TO LOSE A MARATHON A Starter's Guide to Finishing in 26.2 Chapters

"Simpsons" writer Joel H. Cohen shares what he learned as he went from self-described "chubby middle-aged guy" to marathoner. Narrator Nicholas Techosky delivers the 26.2 chapters (a marathon is 26.2 miles), which in book terms equal 26 chapters and the world's shortest epilogue. Helpful information on running gear such as treadmills, shoes, and apps is covered. Uncommon terms are explained. Colorful descriptions of marathons around the world are inspiring. Techosky's encouraging tone will keep new marathoners motivated, particularly as Cohen promises, "If I can do it, you can, too." Quotes--from runners, books, and African proverbs--pepper listeners with other helpful viewpoints. Most satisfying is hearing Cohen take on purists who look down on slow runners. He believes EVERYONE who finishes a marathon is a winner. S.G.B. © AudioFile 2017, Portland, Maine [Published: APRIL 2017]