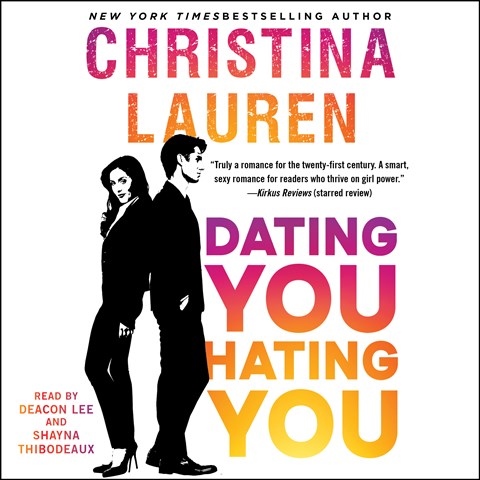 DATING YOU/ HATING YOU

The first stand-alone novel by Christina Lauren is narrated by Shayna Thibodeaux and Deacon Lee, and is an utter delight. When two major LA talent agencies merge, Evie Abbey and Carter Aaron are suddenly competing for the same job--which is a problem, as they've just started (sort of) dating. Can they set their feelings aside in favor of their careers? Thibodeaux and Lee are extraordinarily well matched, creating a near-seamless dual narration. Both of their deliveries highlight the humor in the story as well as the genuine likability of the characters. While Evie and Carter do not always behave well, they do act believably. An enjoyable new direction for Lauren is recommended for fans of classic screwball comedies. K.M.P. © AudioFile 2017, Portland, Maine [Published: AUGUST 2017]