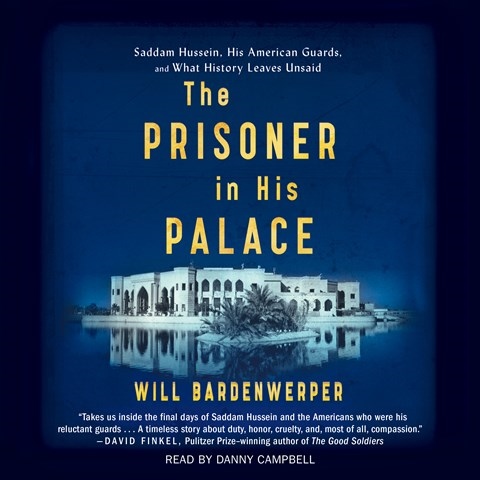 PRISONER IN HIS PALACE Saddam Hussein, His American Guards, and What History Leaves Unsaid

by Will Bardenwerper | Read by Danny Campbell

This audio production explores the many layers of a historical figure who is considered thoroughly evil. The person in question is Saddam Hussein, the longtime Iraqi despot, as seen by the Super 12, the American military policemen assigned to guard him in the period leading up to his trial for war crimes in 2006. Narrator Danny Campbell convincingly voices the soldiers, who come off as mostly young and somewhat naïve. They learn there's more to Saddam than his historical record. With slightly accented English, Campbell's Saddam is more than a murderous dictator. He is also a husband, father, sage, and patriot--a man doing what he thinks is best for his people. Having lived for months with Saddam, the Super 12, in their own words, tell how their feelings about him evolved. The result is a thought-provoking portrait of a complex man. D.E.M. © AudioFile 2017, Portland, Maine [Published: NOVEMBER 2017]