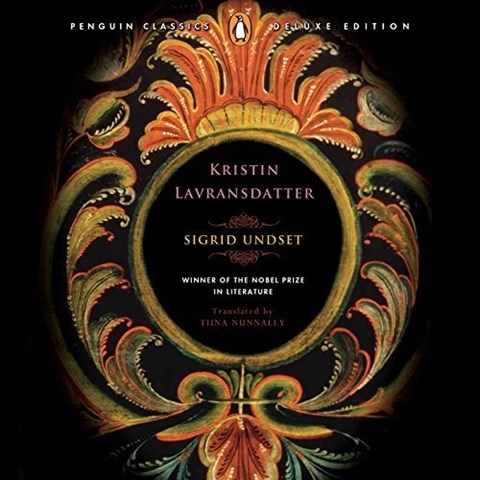 KRISTIN LAVRANSDATTER is a masterpiece of storytelling. It was published in 1922, and its author won the Nobel Prize in Literature in 1928. Her work has lost none of its power or appeal since. That the 1997 Tiina Nunnally translation is now available as an audiobook is a literary event, since an immersive saga of such length and depth will be particularly appealing to many in this format. Kristin is a fourteenth-century Norwegian landowner's daughter. Undset created a historical world around her as fascinating and accessible as that in Mantel's WOLF HALL. Narrator Erin Bennett has prepared meticulously and makes this distant world immediate and real, and the fates of myriad characters inexpressibly believable and moving. Her pacing is compelling, and her emotional range impressive. Brava. B.G. Winner of AudioFile Earphones Award © AudioFile 2017, Portland, Maine [Published: NOVEMBER 2017]