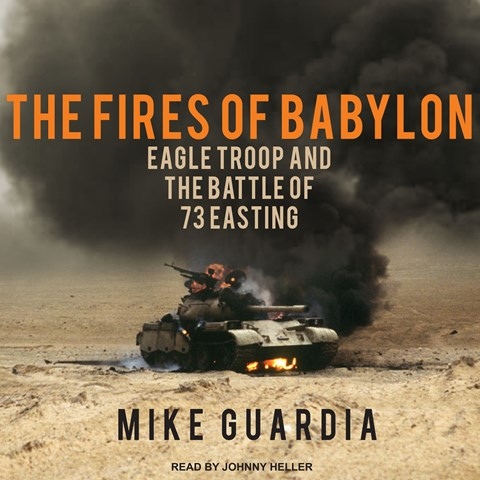 Guardia's audiobook, narrated by Johnny Heller, presents an informative picture for the military history buff. It's an examination of the Battle of 73 Easting--a crucial initial tank battle during Operation Desert Storm--as told by the soldiers who fought in it. In this conflict, the 12 American tanks of Eagle Troop, the lead element of the U.S. VII Corps, advanced into Iraq and sliced through the 53 tanks of the Tawakalna Brigade of Iraq's elite Republican Guard in 23 minutes. Voicing real-life characters may not have given Heller much room for creativity, and the production suffers as a result. He employs a matter-of-fact tone that makes it difficult to differentiate among the 20 or so soldiers. Nevertheless, it's worth listening to the story of this important battle. D.E.M. © AudioFile 2017, Portland, Maine [Published: NOVEMBER 2017]