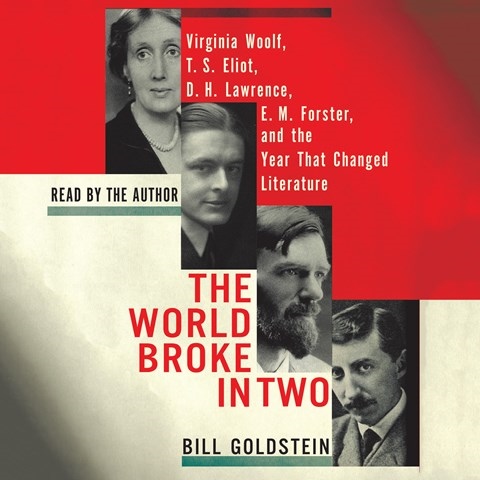 The year 1922 was a momentous one in modernist literature: It saw the publication of Joyce's ULYSSES, Eliot's WASTE LAND, and the first English translation of Proust. Those are intimidating works, but Bill Goldstein makes them approachable to listeners. As book editor for the NEW YORK TIMES, Goldstein is also a veteran of television and podcasts, so his tone is never academic. In any case, the focus is not the literary works themselves but rather the personal lives of four major figures from this period. There are intimate moments here. By leaning heavily on the journals and correspondence of Virginia Woolf, T.S. Eliot, D.H. Lawrence, and E.M. Forster, the audiobook combines journalism and criticism with a dollop of gossip. D.B. © AudioFile 2017, Portland, Maine [Published: SEPTEMBER 2017]