Home»Reviews»TURTLES ALL THE WAY DOWN 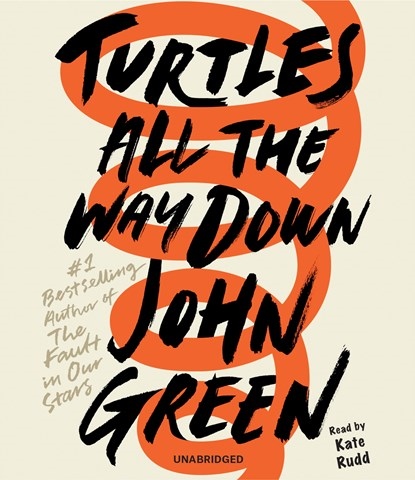 TURTLES ALL THE WAY DOWN

Popular author John Green's story is inspired by his own suffering with obsessive-compulsive disorder. Narrator Kate Rudd dramatizes the quick intelligence and high anxiety of high school junior Aza Holmes, who has an incapacitating fear of being infected with a deadly bacteria. Rudd offers poignant pictures of Aza's struggles through vivid portrayals of other characters. She colors Aza's mother with restrained worry and fierce protectiveness and gives a steady, calming voice to wealthy Davis, Aza's old friend and potential new boyfriend. She paints Aza's oldest friend, Daisy, with animated concern and, sometimes, frustration. Rudd expresses most strongly Aza's sarcastic inner voice, which is so developed that it becomes a character. The convincing portrayals makes it easy to see how Aza is hindered in loving, thinking, and living without fear. S.W. Winner of AudioFile Earphones Award © AudioFile 2017, Portland, Maine [Published: NOVEMBER 2017]