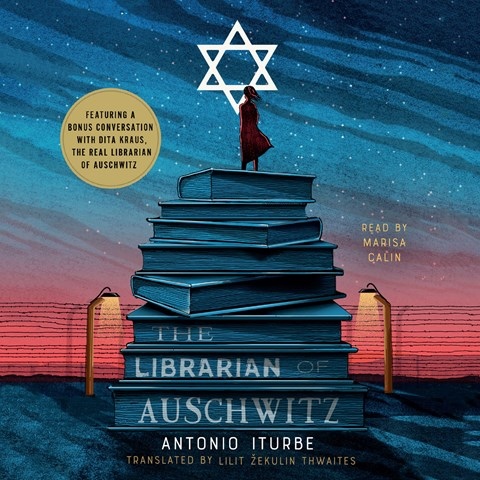 THE LIBRARIAN OF AUSCHWITZ

This powerful young adult novel introduces listeners to 14-year-old Dita Kraus, a Czechoslovakian Jew who, with her parents, was sent to Auschwitz in December 1943. Through meticulous research, including multiple correspondences with Dita, Antonio Iturbe paints an accurate picture of life in Auschwitz in all its horror. Marisa Calin's narration straightforwardly tells this chilling but ultimately inspiring story with an unemotional delivery that emphasizes the amazing strength, hope, and courage that sustained the prisoners of Auschwitz in the face of incredible inhumanity and deprivation. An opening letter, read by Dita herself, and an afterword recounting what happened to the real-life people who appear in the story give this work the weight of history within a compelling tale. N.E.M. © AudioFile 2017, Portland, Maine [Published: NOVEMBER 2017]