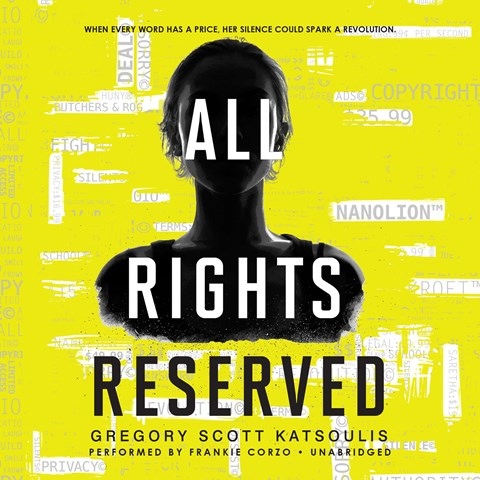 Speaking as an observing protagonist who has taken a vow of silence requires excellent vocal interpretation skills from an audiobook narrator. Frankie Corzo pulls that off in this dystopian novel, a provocative imagining of a corporate-owned society run amok. Silent Speth has arrived at the age at which she will be charged for each element of intellectual property she uses--including each word she speaks. She's a quiet presence, while those around her--from her younger brother to street thugs--plead, cackle, yell, and otherwise make themselves heard in well-differentiated voices. Listening to this audiobook adds one more layer of horror to the possibilities it raises. It's the first in a new series, and both author and narrator leave listeners eager for more. F.M.R.G. © AudioFile 2017, Portland, Maine [Published: NOVEMBER 2017]