HomeÂ»ReviewsÂ»BEFORE THE DEVIL BREAKS YOU 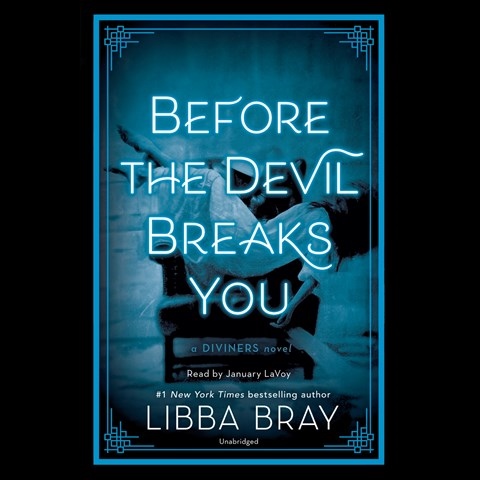 BEFORE THE DEVIL BREAKS YOU The Diviners, Book 3

Narrator January LaVoy shines in the third installment of The Diviners series. In 1920s Harlem, the Diviners, a disparate group of preternaturally gifted young people, work to discover the source of their powers as a new threat to the equilibrium between good and evil emanates from a local asylum. The story is a striking blend of history, magic, horror, and romance, and LaVoy's narration highlights each element through clear enunciation, careful pacing, and dramatic flair. Despite the considerable number of characters and their intersecting storylines, LaVoy never misses a beat, demonstrating a wide range of vocal dexterity and skill that creates the impression of an ensemble. Listeners are encouraged to begin at the beginning of this planned four-audiobook series and enjoy LaVoy's mastery. A.S. Winner of AudioFile Earphones Award © AudioFile 2017, Portland, Maine [Published: NOVEMBER 2017]