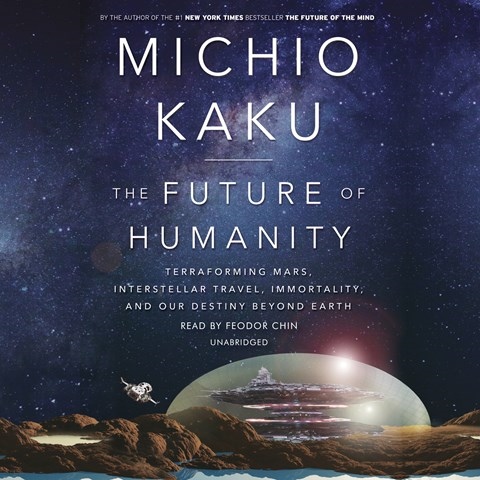 THE FUTURE OF HUMANITY Terraforming Mars, Interstellar Travel, Immortality, and Our Destiny Beyond Earth

Whether he's discussing antimatter starships or the prefrontal cortex, Feodor Chin's narration is unflaggingly positive. That's not to say he presents an overly bright reading of this audiobook about humanity's chances for survival. Chin's reading is anchored in a journalistic tone that matches the author's pop-science style--part scientific, part anecdotal, and part speculation. The premise is that Earth will one day become unsustainable due to human activity (climate change, overpopulation) or natural disasters (volcanic eruptions, exploding asteroids). Can humans strap on the antigravity boots and "get out of Dodge" in time? Science fans will appreciate the detailed research and friendly explanations. Skeptics, however, may wonder how our fractious species will ever achieve enough cooperation to colonize Mars. R.W.S. © AudioFile 2018, Portland, Maine [Published: MARCH 2018]