HomeÂ»ReviewsÂ»THE MOST DANGEROUS MAN IN AMERICA 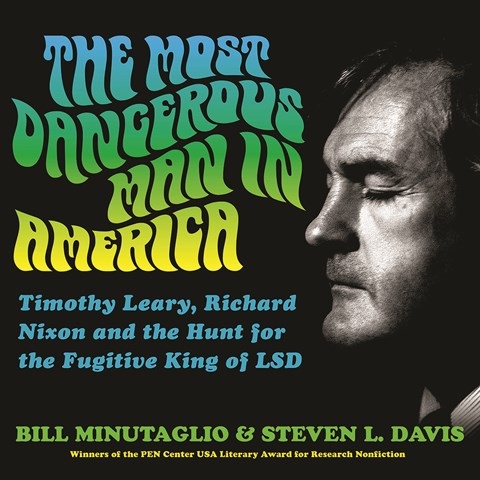 THE MOST DANGEROUS MAN IN AMERICA Timothy Leary, Richard Nixon and the Hunt for the Fugitive King of LSD

In 1970, ex-Harvard professor Timothy Leary, who was made famous by advocating that everyone should take LSD, escaped from prison and threatened to burn down the White House and take over the government. His escape was facilitated by the Weather Underground, the FBI's most wanted domestic terrorist group. Narrator Peter Ganim uses his bass voice and jaunty pacing to propel this madcap audiobook. He captures the sarcasm of this incredible adventure and uses his voice to wink and nod to the listener. There are times, though, when he does need to go easy on the snark sauce. At some points, he rambles on with the intent to make us shake our heads at the goings-on but instead loses momentum in his effort to get a laugh. R.I.G. © AudioFile 2018, Portland, Maine [Published: MARCH 2018]