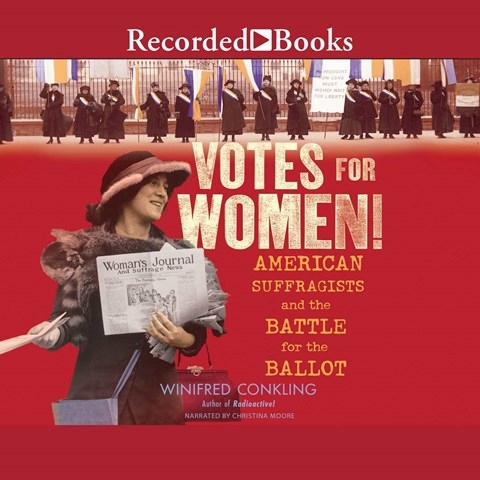 VOTES FOR WOMEN! American Suffragists and the Battle for the Ballot

That the story told in this audiobook is one you think you know deprives it of none of its power. Winifred Conkling begins with 11-year-old Elizabeth Cady’s dismay in 1826 at realizing that her father will see her as less lovable and valuable than a son no matter what she accomplishes. It ends 94 years later with the cliff-hanger passage of the 19th Amendment. The fascinating real-life characters in between, including Susan B. Anthony, Sojourner Truth, and Frederick Douglass, give narrator Christina Moore plenty to work with, not to mention that the misogyny, disrespect, rudeness, and outright violence faced by these and later freedom fighters are both truly shocking and disgustingly familiar. Moore’s poise and skill in delivering Conkling’s compelling narrative are superb. B.G. © AudioFile 2018, Portland, Maine [Published: APRIL 2018]