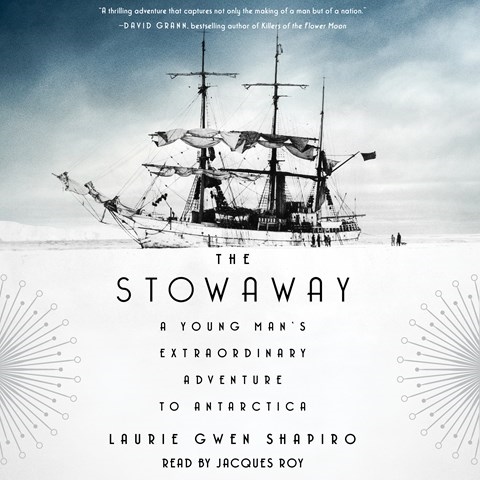 THE STOWAWAY A Young Man's Extraordinary Adventure to Antarctica

Shapiro's story of Billy Gawronski stowing away on Richard Byrd's expedition to the South Pole in 1928 is an old-fashioned adventure yarn that harks back to the bravado of polar expeditions. Narrator Jacques Roy is clear and authoritative, befitting the heroic age. Billy's story is full of daring and pluck, overcoming obstacles, and generating sensational newspaper headlines. In Billy's first attempt at stowing away, he swims a mile in the Hudson River. Discovering him, along with two other stowaways, the crew quickly rousts them all out. After three attempts, Byrd gives the lad a shot, and Billy heads to Antarctica as a mess boy. While more boldness and enthusiasm would have better matched the author's tone, Roy expresses the story's wry humor. A.B. © AudioFile 2018, Portland, Maine [Published: APRIL 2018]