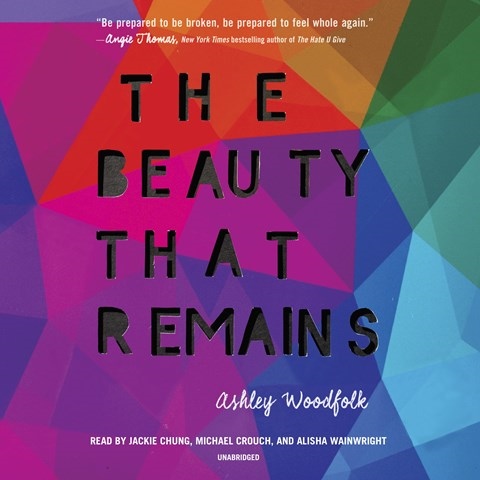 THE BEAUTY THAT REMAINS

Three teens grieve over the untimely deaths of those who matter to them, and three narrators give strong portrayals of each. Together they present a poignant picture of healing. Jackie Chung portrays Autumn, whose best friend, Tavia, has died in a car wreck. Chung's soft tones are a good fit for the Asian-American adoptee who is obsessed with how she might have prevented Tavia's death. Alisha Wainwright portrays Shay, whose vibrant twin, Sasha, has died of leukemia. Wainwright captures the overwhelming emotions of sorrow and emptiness that bring on Shay's panic attacks. Michael Crouch portrays Logan, whose first boyfriend, Bram, has apparently committed suicide. Crouch expresses Logan's plummet into anger and alcohol and his determination to resolve the ambiguity of Bram's death. S.W. © AudioFile 2018, Portland, Maine [Published: MARCH 2018]