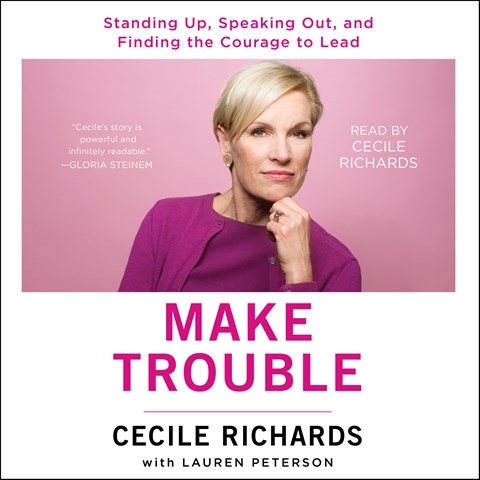 MAKE TROUBLE Standing Up, Speaking Out, and Finding the Courage to Lead--My Life Story

Cecile Richards, longtime president of Planned Parenthood, delivers a terrific performance of her inspiring new memoir. While not a professional narrator, Richards is a practiced public speaker who reads with energy, enunciation, excellent pacing, and emotion as she tracks her career in rabble-rousing from its start at home in Waco, Texas. The child of political activists—her father, a lawyer, often represented unions, and her mother famously became a left-leaning governor of Texas—Richards began her own trouble-making career by getting kicked out of school for protesting the Vietnam War. What a ride it’s been since. Richards is fierce, funny, and pulls no punches, which will offend some and motivate many for whom this stirring audiobook will serve as a call to action. A.C.S. Winner of AudioFile Earphones Award, 2018 Best Audiobook © AudioFile 2018, Portland, Maine [Published: APRIL 2018]