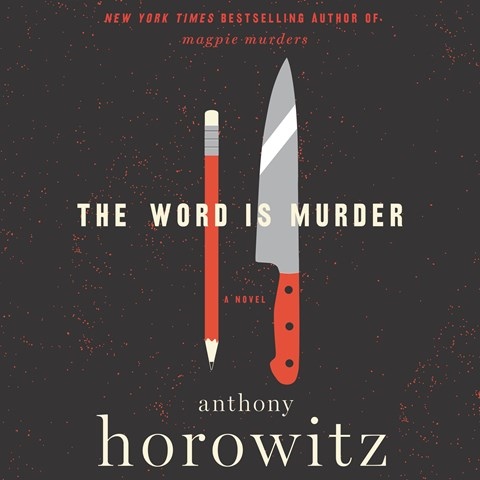 THE WORD IS MURDER

Rory Kinnear flawlessly performs this entertaining metafiction in which the real mystery writer Anthony Horowitz is persuaded by a fictional investigator called Hawthorne to shadow him as he solves a murder so Horowitz can write about it and make them rich. This is mad fun, especially if you are a fan of "Foyle's War," "Midsomer Murders," or other of Horowitz's work, since real movie folk (Spielberg!) from Horowitz's actual life become part of the story. It's a fresh and diverting spin on the classic scenario: eccentric-but-brilliant master sleuth with earnest-but-bumbling sidekick. Sherlock Holmes, anyone? (Horowitz has written that character, too.) Kinnear is so good you forget he's there; instead you feel as if you've seen this as a movie on some screen in your intercranial theater. B.G. © AudioFile 2018, Portland, Maine [Published: JUNE 2018]