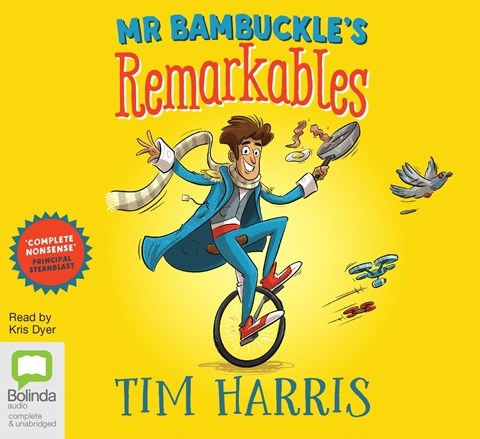 Narrator Kris Dyer is ideal to introduce delightful Mr. Bambuckle, a dream teacher for all ages. Kids know they're in for a treat when Mr. Bambuckle enters their classroom riding a unicycle and wearing a shimmering blue suit. His enthusiasm catches everyone's attention, and Dyer deftly captures various Australian accents, including that of nosy, grumpy Principal Sternblast. Dyer's Mr. Bambuckle encourages pupils to be themselves and to conquer their personal fears. For example, Scottish Harold, whom Dyer bestows with superbly rolled "r"s, learns that his flamboyant singing and dancing parents should be a source of pride rather than embarrassment. Also Vox Vroom changes his bullying ways after he realizes that not everyone is like his abusive father. The cliff-hanger conclusion will have listeners eager for more. S.G.B. © AudioFile 2018, Portland, Maine [Published: AUGUST 2018]