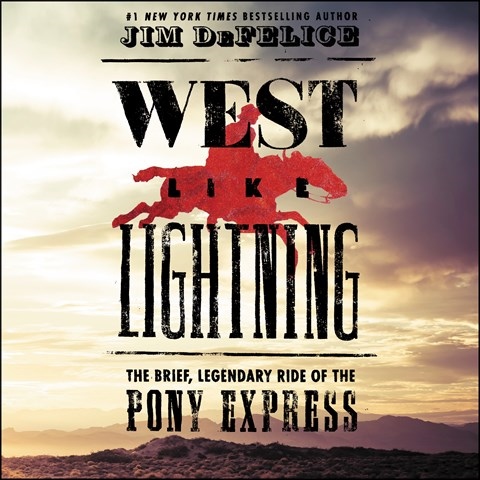 WEST LIKE LIGHTNING The Brief, Legendary Ride of the Pony Express

Around 1860, three men decided to create a faster way to deliver mail throughout the United States. This audiobook tells the story of the famed Pony Express from its beginning to its end only 18 months later. Narrator John Pruden turns this slice of American history into an entertaining performance filled with men of legend such as Wild Bill Hickok, Buffalo Bill Cody, and even Mark Twain. Listeners hear the Western twang of these characters, including the cowboys who raced across the territories through Indian lands, harsh wilderness, and searing heat to transport the mail. The story of these amazing men, especially told by Pruden, will engage history buffs and general listeners alike. E.E.S. © AudioFile 2018, Portland, Maine [Published: AUGUST 2018]