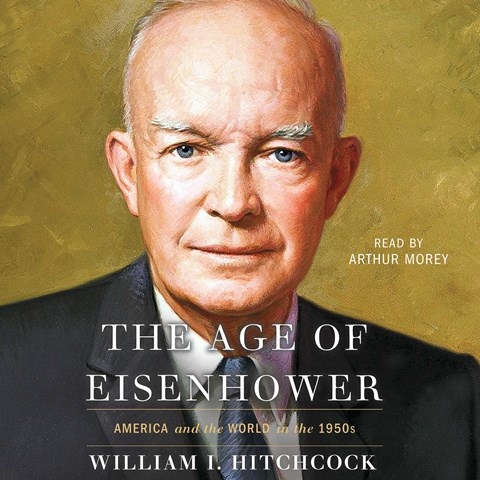 THE AGE OF EISENHOWER America and the World in the 1950s

by William I. Hitchcock | Read by Arthue Morey

This audiobook, narrated by Arthur Morey, continues a recent trend that sees Eisenhower's presidency as far more important than it looked when he left Washington in 1961. Historians now place him among the top 10 presidents, putting his accomplishments in context and comparing the endurance of his policies with the men who have served since. Morey guides us through this historical survey with an authoritative voice appropriate for a great reappraisal of Ike. Morey's low, jowly voice sounds somewhat scratchy, and he approaches the work straightforwardly. While he uses limited range, he paces the book effectively, keeping events moving and emphasizing new information the author has uncovered. R.I.G. © AudioFile 2018, Portland, Maine [Published: APRIL 2018]