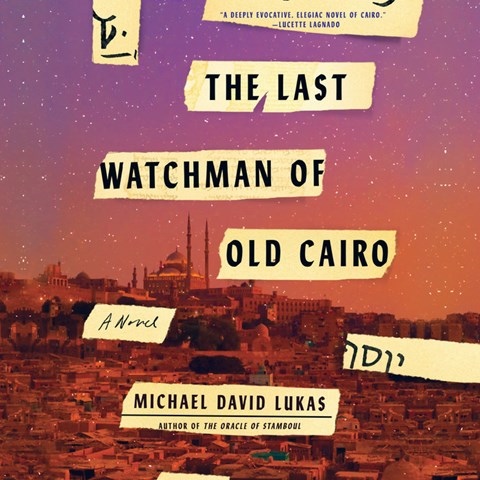 THE LAST WATCHMAN OF OLD CAIRO

The Cairo Genizah is a collection of 300,000 Jewish manuscript fragments that were found in a storeroom (genizah) in Egypt. As Edoardo Ballerini narrates, the story coalesces around three characters: Ali al-Raqb, the first watchman of the Ben Ezra Synagogue in Cairo over a thousand years ago; his current-day descendant, Joseph al-Raqb; and Scottish scholars Agnes S. Lewis, Margaret D. Gibson, and Solomon Schechter, who discovered the scrolls and documents in the Cairo Genizah in 1896. Using soft Arabic and British accents interspersed with a steady uninflected narrative, Ballerini draws listeners into the worlds of ancient and contemporary Egypt. The magic of the Ezra Scroll and the ancient fragments of other documents flows through the story and transcends the generations. Ballerini's performance is as magical as the story itself. M.B.K. Winner of AudioFile Earphones Award © AudioFile 2018, Portland, Maine [Published: MAY 2018]