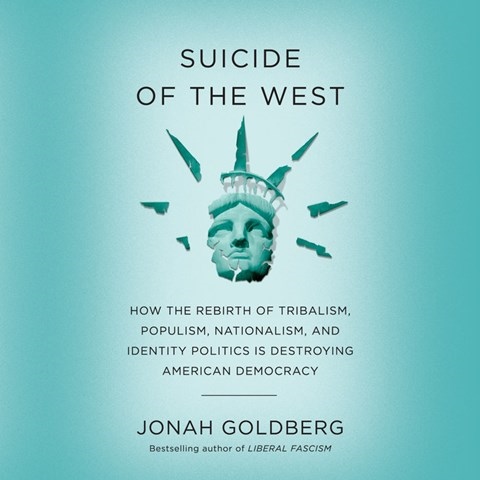 SUICIDE OF THE WEST How the Rebirth of Tribalism, Populism, Nationalism, and Identity Politics isDestroying American Democracy

NATIONAL REVIEW editor Jonah Goldberg's high-voltage performance grabs attention as he expresses amazement at the massive amount of historical research, insights, and detailed arguments he has put together. He's an accurate narrator with a strong and flinty voice, so listeners are never in doubt about the themes of this elaborative audiobook. With compelling examples and stories, he shows how the West's prevailing political system--liberal democratic capitalism--developed as a stabilizing alternative to the tribal cultures and despotic rule that existed for centuries around the globe. But as good as this system is, he says, it's fragile and under threat today from alienated populists who are attracted by the power of the mob or the certitude of strongman rule. An intellectually fascinating audio by most standards is oversold by the author's exuberance at the microphone. T.W. © AudioFile 2019, Portland, Maine [Published: JUNE 2019]