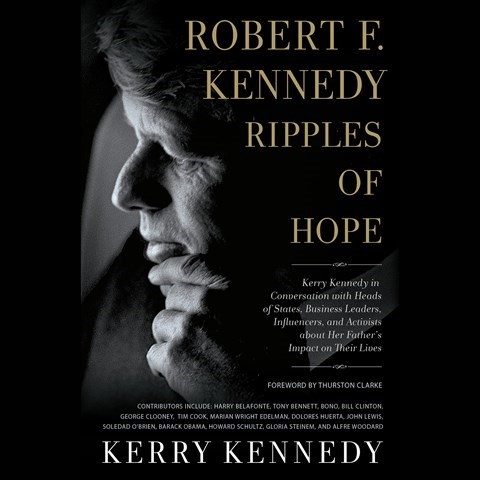 ROBERT F. KENNEDY: RIPPLES OF HOPE Kerry Kennedy in Conversation with Heads of State, Business Leaders, Influencers, and Activists about Her Father's Impact on Their Lives

Multiple narrators discuss Robert F. Kennedy's lasting influence 50 years after his 1968 assassination. Daughter and author Kerry Kennedy narrates her portion of interviews with political, media, and business leaders and celebrities with little variation in inflection. While Peter Gallagher gives some character traits to the men whose words he is narrating, some unusual pronunciations distract from his performance. Overall, there is little to differentiate interviewees, especially when depicted by Catherine Keener. While this is an interesting collection of interviews between RFK's daughter and influential personalities, the audio production leaves much to be desired. Those interested in learning more about RFK's impact may want to pick up the print edition instead. A.L.S.M. © AudioFile 2018, Portland, Maine [Published: AUGUST 2018]