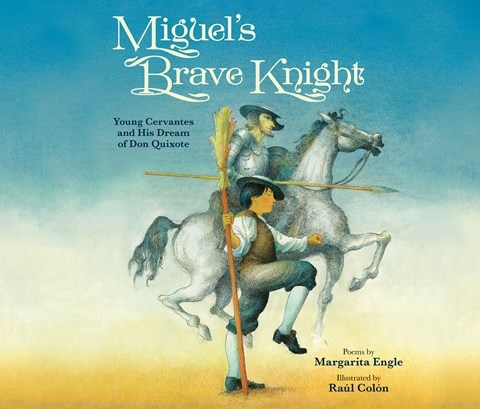 The early life of Spanish author Miguel de Cervantes Saavedra is narrated in first-person poems by Thom Rivera, each one depicting a vivid snapshot of his childhood. Through his family's struggles with debt, young Miguel finds solace in his daydreams of a brave knight named Don Quixote who rides out on his steed to right the wrongs of this "terribly mixed-up world." Sounds of the horse whinnying and trotting bring his adventures to life, while classical guitar music and Rivera's accent heighten the Spanish ambiance. Listeners will feel like they are in sixteenth-century Spain. Notes at the end of the audiobook fill in the details of Cervantes's colorful life and explain the importance of his literary classic DON QUIXOTE. S.C. © AudioFile 2018, Portland, Maine [Published: JUNE 2018]